On our trip to Saudi Arabia, my Saudi hosts frequently addressed the issue of gender and how we women were doing, and God knows it was a concern for some of us long before the trip began. So in honor of our hosts, who frequently engaged me on the topic of gender, I offer my thoughts on being a woman–an American woman–on a brief tour of Riyadh, Saudi Arabia.

The women on our team were particularly concerned about what to wear on the trip, long before the trip began, due to Saudi laws and customs about attire. Few of us own long skirts and baggy clothes, and we were aware that women were required to cover their heads in Saudi Arabia, an Islamic state. But we read and heard conflicting accounts of what we were supposed to wear. So we all brought head scarves and baggy clothes that covered our arms and legs.

But just before the plane landed in Riyadh, I noticed that all the women on the plane pulled black robes and head scarves out of their carry-on bags and put them on. Hmmmm. Then, when we were killing time in a shopping mall on our first night, wandering around in our western clothes with our heads covered, one of our group members approached a trio of young Saudi women and asked them what we should be wearing. “You need to wear abayas,” the young woman responded. 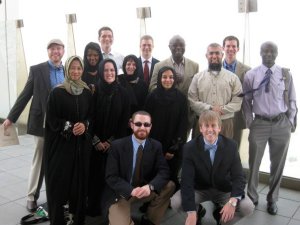 Abayas are long, black robes that snap in front and cover the entire body. Along with this, women wear hijab: a head scarf that covers the head, hair, neck, and in some cases, the face of the woman. I have read varying accounts of the purpose of the head covering, and they say similar things: it is a sign of modesty, and it is also a way of protecting women from molestation. Other accounts say that it is a sign of submission to God. (And head coverings for women have also been used in Christianity and Judaism to signify modesty and devotion, especially during prayer.)

These garments are required by law in Saudi Arabia, an Islamic state in which state law and religious law are not differentiated. (This is not true in all nations in which Islam is the majority religion. In fact, covering the head is not a requirement of Islam in most places.) In Saudi Arabia, women can be prosecuted by muttawas (secret police) if they are not dressed appropriately.

This information was a bit unnerving because we did not know whether we, as visiting Americans, were required to wear these and where we were supposed to get these. In the mall that first night, we noticed that someone was following us and taking pictures of us.

The next morning, one of our hosts during a tour kept saying to me, “We have something for the ladies, before you go outside.” The something turned out to be embroidered abayas. I gestured to them and asked him, “Do you want us to put these on?” He said yes.

I had anticipated something like this, partly from what I had read and partly from the fact that every single woman in Riyadh was clothed in black and completely covered up. (I would have taken a picture of this for you, but we were told it was not legal to take pictures of women.) And before we went to Saudi Arabia, I just assumed that, when in Rome, I would do as the Romans. I have done that many times on other trips.

But I have to say that the trip changed significantly for me after that moment because my gender became the primary thing by which I was identified in public. Group dynamics changed. Body temperature changed; I was encased in hot black nylon robe and scarf over street clothes, and that blackness absorbed the 103-degree heat. (Saudi men, by the way, wear white robes and head coverings, which reflect the desert sun.) My ability to move freely changed. I was very conscious of being watched in public: as I came off the elevator every morning into the hotel lobby, as I entered a room full of men that is usually for men only, and so on. When I returned to my hotel room, the first thing I did was to take off the abaya. I experienced it as very confining and differentiating.

What did NOT change post-abaya, thanks be to God, was the way our hosts treated me. Whether I was in Western clothes or black abaya, whether my scarf was completely covering my neck or flung off, my hosts were interested in talking to me about politics, religion, Yale, American culture, Islam in the U.S., my impressions of Saudi Arabia, and so on. Prince Turki was just as likely to call upon the raised hand of a woman as that of a man. (Would that American teachers were as egalitarian….)  I did not feel at all diminished by their treatment of me in conversations. On the contrary, I wondered why they considered my opinion on American foreign relations with Israel at all.

Some of those conversations were about gender issues. During a lunch at the Center for Islamic Studies, one of our hosts asked me if we had learned about the secret police during our during of the University of Security Sciences. “Secret police?” I asked. “Our morality police–muttawa,” he clarified.

“I see,” I said. “Are exceptions made for Americans who don’t know the customs?”

“Not at all,” he said. He looked at the abaya he had given me. “We did not always require these,” he said. Then he told me a story of an Egyptian woman who was attacked in Mecca during the Hajj (pilgrimage). After that, he said, people told the Saudi government that they were not doing a good job of protecting their people, and the Saudi government passed a law requiring women to wear the abaya and hijab so that women would be safe. I was not sure how to respond to that one.

Another government official told me that his daughter hates wearing an abaya (we heard that from other sources about daughters) and that he hopes things change in Saudi Arabia soon. In particular, he and others hope that Saudi Arabian women will be allowed to drive soon. Currently, Saudi women must be driven by men if they wish to go anywhere.

Other differentiations between men and women in Saudi Arabia did have their effects upon me. On our very first morning there, we were told that the hotel had a wonderful health club. “But for men only,” a hotel official quickly added. For the three women in the group who exercise frequently (including moi), this became problematic. Some of our daily guides would not engage in conversation with a woman, so while the men in our group could chat it up in cultural exchanges, I could only sit near my guides in silence as they or I averted our eyes.

I was surprised to learn that there is no physical education for girls in Saudi Arabia, and that women and men are segregated in all public places. In the large public library, this means that women have a much smaller, separate reading room with only a reference library. If they wish to read something else, they need to request it from the stacks; there is no way to browse the stacks. Women cannot work in places in which they will serve male customers, although men can work in places in which they will serve female customers.

These aspects of Saudi culture mystified me. When our hosts tried to engage us on issues of gender and how we felt about being a woman in Saudi Arabia, we did not really indulge them. We were more interested in what they thought about gender issues in Saudi Arabia. Also, it’s hard to talk about gender in Saudi Arabia when one is talking only to men. We noticed that we were not meeting any women, and we did ask about that. One scholar said, “Yes, you should meet some women,” but that did not happen. We had a couple of random encounters with women in malls, but these encounters were brief and tended to revolve once again around the topic of wearing abayas and covering our heads. Sigh.

I did encounter one Saudi woman via a blog, and she writes about broader topics related to gender (employment, education, marriage) that I longed to ask about when I was in Riyadh, so I leave the last word to her: http://saudiwoman.wordpress.com/.