I had two wonderful experiences of Communion today that underscored the love and charity that can exist between people of different faiths. (For any non-Christians reading this, “communion” is the word Christians use to refer to, among other things, the communal meal of bread and wine, often consecrated to be the body and blood of Christ. We believe that in the sharing of that bread and wine, body and blood, that we become one with Christ and one with one another. We are galvanized as the body of Christ.) 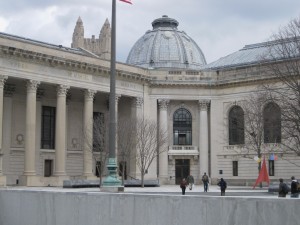 Every day, I walk home from my introductory German class, and I take a shortcut through Woolsey Hall, a huge domed building that looks like a miniature St. Paul’s Cathedral. (Remember Mary Poppins???) Anyway, a couple of months ago, some students set up a table there, at the entrance to the central campus dining commons, and every Thursday they sell kosher challah, the egg bread eaten by some Jews. The proceeds are donated to charities serving the hungry in New Haven, and sadly, there are a lot of hungry people in New Haven. I kept walking by this table, until one day last month, when I heard the young woman asking, “Buy challah and feed the poor?” I turned and bought a loaf and thanked her for feeding the homeless.

This morning, I was racing through Woolsey Hall to get back to campus for an Episcopal Peace Fellowship meeting, and the same young woman said to my back, “Want some challah? All proceeds go to the hungry of New Haven.” In fact, I was extremely hungry and wasn’t sure I’d have time to eat lunch before my meeting, so I wheeled about and said, “Yes!” She said, “They’re kosher, if that matters to you.”

I laughed and said, “No, it doesn’t.” But then I felt a little embarrassed in case she had misinterpreted my laugh as an expression of derision about religious dietary rules. In fact, I think that conscientious practices about eating (or not eating) can be a beautiful spiritual practice. So I quickly added, “I love your bread!” Then I wolfed it down on the way back to the Div. School and was grateful for the sacred connection with this young woman who bakes bread to feed the physically and spiritually hungry.

Then, tonight, I attended a poetry reading by Robert Pinsky, the U.S. Poet Laureate, translator of Dante’s Divine Comedy, and my little brother’s former creative writing professor at Cal Berkeley in the late 80s. He spoke beautifully about what it meant for him, a Jewish man, to write poetry in English, a language he calls a Christian language, and to be Jewish in a majority culture that is not. He joked about being Jewish and translating Dante’s great Christian epic, and he explained why he did it: because of his interest in the sacred. His stories reminded me of how I, an observant Roman Catholic at the time, discovered in my teen years a love of literature written by Jewish writers such as Chaim Potok, Aaron Appelfeld, Philip Roth, and Bernard Malamud.

After the reading, Yale’s Institute of Sacred Music provided a wonderful reception, and I stood in line to talk to Robert Pinsky. I listened to him take his time with fans of his poetry, undergraduates, faculty members, and so on. When we spoke, I told him that he was my brother’s creative writing teacher at Cal, and that he had been a real inspiration to my brother and had encouraged my brother to send his anti-war poem to a peace anthology. (It was published.) Robert Pinsky asked me what my brother was doing now, and I said that he died six years ago. We talked about my brother’s career as the director of PR for the Santa Clara County Health and Hospital system, and then Robert Pinsky shook my hand. Then he said, “Oh, heck!” and gave me a long hug.

I have met a lot of famous poets in various creative writing programs (Nobel Prize winner Seamus Heaney was a favorite), but none with the teaching and pastoral sensibilities of Robert Pinsky.  It was a wonderful, brief connection with a fellow human being who just happens to be famous. It was Communion.