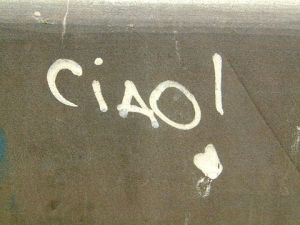 The problem with getting ready to leave a seminary where one has lived, studied, worshipped, eaten, and partied for three years is that everyone wants to process our imminent departure. After all, most of us are people people.

There are multiple worship services with “goodbye” as the central theme of the readings and hymns. Seminarians preaching near the end of the year deliver tearjerking sermons and readings on “goodbye.” Dramatic types perform skits about it.

Pastorally gifted students ask in the hallways as we try to sidle away, “How are you doing? I bet you’re feeling excitement/grief/relief/sadness right now.” Yes. And don’t forget terror. And gratitude.

And the administrators send emails reminding us to clean out our lockers, get stuff into the registrar, pay library fines, etc.

I seriously considered holing up for a few weeks and just letting the whole goodbye thing pass me by. Don’t go to chapel anymore; that way, I won’t miss it when I’m gone. (This is a double whammy goodbye for Berkeley students, who have two chapel community lives at Yale: St. Luke’s Chapel for Episcopal morning prayer, and Marquand Chapel for the ecumenical community of Yale Divinity School.) Plug my ears when they play my favorite songs.

Just turn in the final papers and don’t say anything to the faculty, many of whom I have known for three years. Just walk past the many pastoral presences in my life who have helped me through some difficult life moments here. (They say goodbye to a whole class every year. They won’t remember me in a year.)

I know, dear reader, that you know that I know that this is not the way to live, and not the way to leave. When I drove my daughter to the Hartford International Airport back in 2009 for her departure to the first term of college in Seattle, she was extremely abrupt as we approached the airport and told me not to accompany her into the airport. I insisted, but she would not turn and say goodbye to me, would not let me kiss her, before she left.

I understood why she didn’t want that final hug, but it was incredibly difficult for me to look at her back as she walked through the security gates without a real goodbye.

I have ministered to many dying patients and their families as they have struggled through their goodbyes, and there is  a stark difference between those who make themselves vulnerable to a conscious, loving goodbye and those who resist and hide. There’s always a breakthrough moment of transcendence for those who bare themselves to the pain of goodbye. And there’s a blankness and sense of lost opportunity for those who hide.

So. Okay. Obviously, I have not avoided goodbye, because if I were avoiding it, I would not be blogging about it. I have attended chapel(s) and sung the songs I will miss the most. I have been present at as many final community gatherings as I could be. I have been expressing my appreciation to people and receiving expressions of appreciation. I have talked and talked and talked (and prayed) about goodbye and next steps.

I have not, however, cleaned out my locker. Let that, then, be my final line of resistance to this whole goodbye thing.