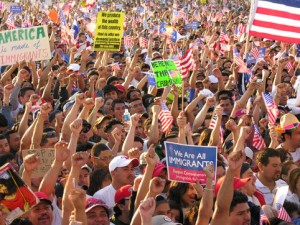 I was deeply dismayed to hear the words “We have a Latino problem” coming out of the mouth of a Republican campaign commentator on the night of the U.S. presidential election. He was offering an explanation for President Obama’s victory over Mitt Romney, but the words he used made me cringe.

I knew he meant that which seemed pretty obvious to the majority of the country: that the Republican party’s platform and campaign rhetoric alienated Latino voters, and this led to President Obama’s capturing most of the Latino vote.

But I was deeply concerned on several levels: 1) He seemed to be saying that if the Republicans had just “positioned” themselves better with Latino voters, had better campaign rhetoric, then they might have garnered more Latino votes and won the election. In other words, things like immigration reform and tax reform weren’t desirable unless they helped a party’s candidate get in office. 2) His statement seemed to exclude the fact that there are a lot of white, African-American, Asian, Native American, and Latino voters who care about the well-being of Latinos in the U.S. and vote for candidates who support policies that will benefit them. 3) The apparent ignorance of the fact that Latinas and Latinos are the fastest growing demographic segment in the U.S. population due both to immigration and higher birth rates; 4) the fact that he put the words “Latino” and “problem” together, instead of perceiving the Latino and Latina presence in the U.S. as a source of incredible richness.

But what really pained me is that I have been walking around for nine years with the conviction that my own church has “a Latino problem”–a lack of outreach to the ever-growing population of Latinos and Latinas in the U.S. I’m talking about first-generation, second-generation, third-generation, and fourth-generation Latinos–not all immigrants, not all Spanish-speaking, and not all in the border states that experience the first waves of immigration.

I should add that I have been in the Episcopal Church for exactly nine years, so I have been bothered by this since the day I started attending an Episcopal church. It was so … white. Although I grew up in a mostly white Roman Catholic congregation as a child, the other Catholic churches I attended as an adult were racially and culturally diverse: I was accustomed to attending church with fellow worshippers who came originally from Mexico, Central and South America, the Philippines, Vietnam, various African nations, and so on. Granted, the Catholic Church’s ministry to these various people came from centuries of colonization, sometimes in violently oppressive ways. As a postcolonial thinker, I recognize the deep problem there.

Nevertheless, Christianity is worldwide now, and the vast majority of Latino immigrants and U.S. born Latinos are Christian. They usually start out Catholic, but statistics show that, as generations remain in the U.S., they become increasingly Protestant, often Mormon or Pentecostal.

As one who switched from the Catholic Church to the Episcopal Church, I know well the path of someone who needs to find a new church but does not feel drawn to Pentecostal or megachurch styles of worship. I found my home in the Episcopal Church, which shares various sacramental and liturgical traditions with the Catholic Church but parts from Catholic teachings in ways that were important to my Christian faith.

Nevertheless, the Episcopal Church lacks a widespread willingness to offer ministry and a church home to Latinos and Latinas. Yes, there are Episcopalians who care deeply about this, and there are several outstanding examples of this in my own corner of the church in New York City.

But much of the Episcopal Church seems to cling to a very Anglo-centric model of thinking and culture, one that is off-putting to many Latinos, according to this report (which appears to be from 2005). And it is disturbing to me as well. I still miss attending churches that represent cultural diversity, and I wonder when my church will get with the program.

Getting with the program must include learning Spanish, because despite the rapidity with which Spanish-speaking immigrants learn English, there is still a great deal of ministry to be done in Spanish. When people are in difficult, stressful moments of their life, they want to express themselves in their mother tongue. I remember with embarrassment being on a chaplain visit with a Spanish-speaking patient. I was able to communicate in Spanish enough to ask why she was in the hospital and why she was crying, but then could not understand–through her tears–her explanation about what was really troubling her. Something about her five-year-old daughter. When I said I could get a translator, she looked very exasperated. It was a lost opportunity to minister effectively to someone in great need.

To minister to people, we need to speak their language. We need to become  culturally and linguistically literate. Sure, we need to raise up Latino church leaders, but I don’t believe that Hispanic ministry can be a niche ministry for a few people–that it can be limited only to Latino leaders. I think it’s the whole Church’s responsibility.

And yet, most dioceses still encourage/require students to study a Biblical language (Hebrew or New Testament Greek), despite the fact that most people training for ordination do not learn enough of that Biblical language or keep up with the language enough to do serious exegesis in that language. Only a few dioceses require or encourage students to study Spanish despite the obvious need for Spanish-speaking church servants in the United States.  Catholic priests, on the other hand, are frequently required to speak Spanish fluently, whatever background they come from.

A true sign of loving our neighbors is to wish to communicate with them. If we love them, we’ll learn their language, worship in their language, pray with them in their language. Having prayed Morning Prayer in Spanish for several years now, I can attest to the spiritual power of addressing God in more than one tongue. “All of them were filled with the Holy Spirit and began to speak in other languages, as the Spirit gave them ability” (Acts 2:4).

I pray that the Spirit pours out this ability upon our church for all of our sakes. Because until then, we’ll have a “Latino problem.”