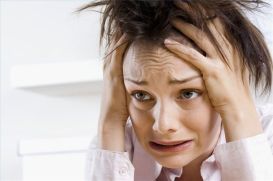 I got a really bad haircut the other day. No te preocupes–I will live. But there I was, literally cringing in the chair as I watched the substitute hair stylist (my regular one is on maternity leave) hack away at my hair and complain about the ridiculous cowlicks on my neck. I knew I was in trouble when she was “trimming” my bangs and said, “Close your eyes so I don’t get anything in your mouth.”

That cringing in the stylist’s chair is the same way subway patrons look when someone gets on the New York subway and starts preaching the “Good News” to us. It usually happens on the 2 line in the Bronx, but I’ve encountered it in Manhattan, too. Someone gets on the train and starts yelling, “Laaaaadies and GENTLEmen, I have come to tell you the GOOD News of Jesus Christ!”

Then they keep yelling. The good news is that we are all horrible sinners. The erstwhile evangelist lists the standard list of sins that we all have committed, explains that Jesus died for our sins, and then says we should be grateful and become Christian.

It is true that part of the Christian message, the one that John the Baptist delivered, the one we hear in Lent, is that we should repent and get baptized. However JBap was preaching to people who came to the banks of the Jordan to hear him speak. They could walk away.

But we are trapped on that train, hurtling through a dark tunnel with no room to move out of our seats and no way to get off the train. We have no choice but to be berated. And the subway patrons’ reaction is to sink further into their plastic seats and become sullen. Or to roll their eyes.

I call that “bad evangelism.” As a graduate student, I can “complicate” that phrase, I can “problematize” it. Who am I to call it bad evangelism if it causes even one person (that 99th sheep) to encounter God or to turn from evil? Who am I to say that loving expressions and caring gestures to willing listeners are more appropriate forms of evangelism? I should (and do) interrogate the cultural and socioeconomic influences that cause some to consider this a more appropriate form of evangelism than I do.

Nevertheless, the cringing is pretty telling to me. No matter what the demographics of the people on the train, they want off the train. In the Bronx, everyone on that train is black or Latino, lower to middle class (except for one white woman in a clerical collar). They want the preaching to stop, too. They’re like someone in a stylist’s chair, getting a bad haircut, and saying quietly to herself, “Please, God, make it stop.”

Compare that to the way people reacted when Jesus taught them. Except for the really worried synagogue officials, others were “amazed.” Or stunned into silence. They often followed him to hear more sermons. Sure, when he sent a herd of pigs to their death, the villagers asked him to leave, but they were probably unhappy about losing their bacon. That would make me scream, too. Others, however, rushed toward Jesus to be healed or fed.

It’s ironic that I’m often wearing a clerical collar when this happens because I ride the 2 train to get to the Cathedral of St. John the Divine for meetings. You would think I could come up with a Christian leader’s response to this. But really, most of these preachers give me a dark look and keep yelling. So I cringe, too.

I complained about these experiences at a diocesan meeting for new priests, saying, “These people make my job harder.” One of the mentors said, “No! It makes your job easier because your message will sound so much better.”

That may be true. But I don’t really want to compete with people whose hearts are probably in the right place, even if I object to their message. And I also don’t want those poor people on the subway to feel so hacked up by the berating messages that they run from any mention of Jesus Christ to avoid the pain.

A subway ride lasts for about 30 minutes. A bad haircut lasts for weeks. An abrasive sermon can do damage for years.

When you look at it that way, I prefer the bad haircut.