So I was listening to Mozart’s Requiem a while back, and I couldn’t help wondering whether God gets angry. “Dies irae” (the day of wrath) are the first words of Mozart’s requiem, a luxurious piece of music based on a poem attributed to the 13th-century Franciscan Thomas of Celano. The gist of the poem is that God’s wrathful judgment is coming, and the speaker mourns our sinfulness and begs Jesus to remember His role in redeeming us from our sin, our most grievous sin.

I had the privilege of sitting through a performance, only three feet from the chamber orchestra and choir at my church, All Saints in Pasadena, California, on our patronal feast of All Saints Day. I’m very familar with the work, mainly because it is immortalized for movie fans in the movie Amadeus. In the movie, Mozart composes this foreboding work after the death of his father, whom he confuses in his imagination with God–as if God were the angry father in the sky.

I was listening to “Dies Irae” and thinking to myself, “DOES God get angry?” I don’t mean the old white guy with white hair in the sky looking down with wrath at the stupid, sinful human beings below. Many believers in God dismiss that concept of God as a somewhat childish one, a concept that is overly reliant on a worldly parental metaphor and fixed on an idolatrous picture of God as a Super Being. That isn’t God, we say. So how could God get angry if emotions are a human thing, a matter of personality?

For those of us who have not limited the concept of God to the personified white male, can there be any truth to the idea of a wrathful God?

There is such a long, long history of thought about God’s nature, much of which refers at some point to the wrath of God, that I find it hard to dismiss the possibility of something called the wrath of God–even when I don’t buy into those theologians’ whole theological system.

Calvin wrote that God is rightly angered at our unrighteousness, and as much as God loves us, God cannot embrace us until our unrighteousness is removed–by, of course, Jesus. Augustine said much of the same thing centuries earlier. Augustine said we are incredibly lucky that we have not yet been destroyed by God. Both Augustine and Calvin believed that God had predestined some for “election” (chosen for redemption and salvation) and some for destruction. And it was God’s prerogative to do so: humanity is so grievously sinful that our salvation through Jesus Christ is a bounteous grace that God gives to whomever God pleases.

Karl Barth also describes God as rightly angered at our unrighteousness, and yet he has a more nuanced view of election. He described all of humanity as elected and all of humanity as judged, and some interpreters of Barth have called him a universalist, while others have read him as a neo-Calvinist. My reading of his commentary on Romans and his Church Dogmatics is that Barth waffled on this quite a bit.

All of these men based their theology squarely on Scriptures, and so it is not surprising to me that Barth waffled. The portrayals of God in the Bible waffle, too. At one moment, the God of the Hebrew Bible is portrayed as judging and wrathful and punitive, and a few chapters later, God is portrayed as forgiving everything in a highly generous manner and providing abundantly for human beings, even though they have violated their covenant with God.

And in Christian scriptures, that same ambiguity about the nature of God exists. God is portrayed as the wrathful judge who lets some guests in and excludes others, who accepts the sheep and damns the goats (Matthew 25); God is portrayed as justifiably angry and vengeful toward sinners (Romans 1-2). And yet God is also portrayed as the gracious, forgiving, abundant provider of life and salvation. God is not only the origin of life but life itself, the ground of being. Beingness itself. God is portrayed as unfathomable in greatness and creativity and mercy. (Examples of this are all over the Bible. If you need a citation, try the Book of Job or a handful of Psalms, and then hop on over to Ephesians.) 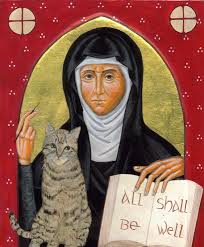 My favorite theologian on this question of whether God gets angry is Julian of Norwich. Here was this medieval woman, trying to make sense of “showings” (visions) she had experienced earlier in life. These included visions of Jesus suffering on the cross and another of Adam/Christ falling into a slough of mud while a loving Master looks on without assisting this servant who struggles in the pit. She keeps asking herself and Jesus what these visions mean, and she struggles with what the medieval Church has taught her about judgment and damnation. Interestingly, scholars differ in the ways they read what she says about salvation. Some read her as a universalist, one who believes that God lifts all of out of the suffering of existence to a new life, and some read her more as an Augustinian. I think she waffles.

In the end, however, she untangles herself from this question by asking the Jesus in the vision on the cross. She grieves about how Christ suffered, and He tells her not to worry; he would gladly do it again forever and ever to show His love. She hears no anger or judgment from Christ at all, and she keeps wondering about that.

Like most mystics, she experienced a deep intimacy with God as well as a profound respect for that which she could not understand about God. Like most mystics, she feared that God was angry at sinners, yet this respect and awe about God led her to experience God as generous in grace, without wrath. She got the message that she was to stop worrying about it. “Sin is no thing,” Jesus tells her.

Theologically, I cannot support the idea that God gets angry, because becoming angry due to some circumstance seems to me a very human thing: we have an emotional reaction to something. In most concepts of God across all theistic religions, God is unchangeable and unchanging. God is always now and ever, and so everything about God, who cannot be separated into parts and does not exist in time, is always on and present, unconditioned by the vicissitudes of creation.

However, if God is consciousness itself, existence itself, then it makes sense that things that offend our consciousness in the form of pricked consciences come somehow from God. It makes sense that things that threaten existence are offensive to Existence Itself–always and forever offensive. It’s possible that God is the source of the anger that we human beings experience in time, in history. I suspect that when I feel tremendous guilt or responsibility or righteous anger, God is at the bottom of that.

For example, when I see pictures of sea animals who have died due to the ingestion of plastic bottles, I feel something that arises from the deepest roots of existence itself: that we have injured creation in a way that offends the Creator, Existence itself. When I hear of another incident of systemic racism that continues to beat down fellow human beings, I feel the same responsibility for having offended Beingness Itself. When I see how much the wealthy nations have in comparison to the poorest, I feel appalled for all of us–rich and poor. I believe we have offended God–not the white man in the sky, but the ground of being. I believe God wishes us to acknowledging wrongdoing and to accept responsibility for fixing these injustices.

However, I don’t believe that Beingness Itself wishes us to be crippled by fear or shame. I believe that Beingness Itself wants to inspire us to turn injustice and desecration around. I believe God wants us to feel regret and anger about these things and to stop destroying God’s creation. So perhaps this inspiration is the wrath of God–not a changeable condition in God, but rather a constant flow of righteousness pressing against unrighteousness to dislodge it. That is, the wrath of God is the “holy anger” or “righteous anger” that God causes in us.

The problem with anything that the Holy Spirit mediates through us is that we sometimes get it wrong. You or I may think that we are channeling the righteous anger of God when we are, in fact, channeling hateful bigotry, or perhaps only misguided ignorance, or our own egos. My gay partnered friends heard this week that they are (yet again) considered responsible for stirring up tornadoes and typhoons. This is hateful bigotry masquerading as the wrath of God.

The only way I know how to avoid the bigoted, ignorant, egotistical response is to avoid sitting in judgment of my fellow human beings. If I believe something to be appalling to God, if I feel “righteous” anger, then I am meant to be a part of a solution, or a balm, or a prophetic voice who recognizes herself as the source of offense, too–not one who feels superior to those other, idiotic human beings over there.

Because that would, well, make God mad.