by Janine SchenonePosted on January 3, 2014 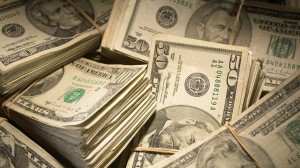 Just recently I read about a church pastor who conducted a church’s stewardship campaign without ever mentioning money. I was astounded at this. Why would a minister/pastor/priest balk at asking for money in a campaign whose purpose is to secure funding to pay for the church’s mission in the coming year?

I could only surmise that he was uncomfortable talking about money or considers money a non-spiritual, non-theological matter. I wish he could have joined me the other day as I assisted the money counters at my church.

Due to the timing of Christmas Eve, Christmas Day, and the following Sunday this year, our money counting volunteers and half of our stewardship team (including me) gathered to sort and count donations from six services at a large church. We have hundreds of people at each service, so our collections are larger than those of many churches. And like every church, we get Christmas holiday visitors who contribute at Christmas services. So we had larger piles to sort than we typically do.

The team isn’t used to having one of the priests show up to help, so they gave me the easiest job: sorting the pledge envelopes, the Christmas gift envelopes, the loose checks, and loose cash into piles.

And I can tell you, it was deeply spiritual. At first, I was just doing the job to help out my department (I oversee stewardship as well as congregational development). And then, as the piles grew, I was praying to God in gratitude for all the gifts. And after I had mastered putting things in the right piles, I looked around the room at our team of volunteers.

I have worked with many church volunteers in a variety of venues (choirs, youth groups, prayer teams, pastoral care teams), and what I noticed with this group was the absolute joy in the room. I saw smiles and heard laughter everywhere. They were working diligently, sorting pledge contributions, ten-keying on their adding machines–and smiling. Donated money is a serious business: you don’t want to lose it, and you don’t want to miscount it. And yet, we were all so relaxed, even though we were moving as quickly as we could.

I turned back to sorting bill denominations and pondered this. Why was I finding this mundane task spiritual? And then I realized that I felt awash in gratitude: not only the gratitude that I felt for the generous people at my church, but the energy of gratitude emanating from the offerings themselves. It was like swimming in the energy of gratitude that spurred people to give money to the church’s mission. In worldly terms, this doesn’t make much sense. Of course, I’m glad people respond to our requests for support; after all, their contributions pay for expenses such as my stipend, housing allowance, and pension. And I felt deeply gratified by the brief notes (“Keep up the good work!” and “Love you guys!”) that people wrote on Christmas offering envelopes, and I passed these messages along. However, we receive contributions toward church expenses and complimentary messages throughout the year. I am bolstered and encouraged by them, but they are not a new thing.

And it wasn’t money for money’s sake that was making us all so upbeat. It just wasn’t. None of this money was going in anybody else’s pocket directly. Some of the people in the room have worked in banks and consider it routine to toss around piles of money. I have felt spiritually high from giving money to church before, and I have felt spiritually stoked from chairing stewardship campaigns.This was the first time, however, that I have hung out with the church money counters, counting 1’s and 5’s and 10’s and 20’s and even a few larger bills. It’s the first time I’ve opened countless envelopes and pulled out checks. It didn’t matter whether I was looking at checks for large amounts or small amounts. The joy was the same.

Instead, the money was an outward manifestation of an inward grace–an inward grace we experience as a church body, not as individuals. It was a confirmation of our communal commitment to our mission–a communal commitment to something greater than ourselves. And it’s a confirmation of the generosity that gives for generosity’s sake, “because it feels good,” as our director of stewardship always says with a beaming smile.

And as I kept asking myself what this joy was about, I realized it wasn’t only about bringing in enough money to cover our bills (I am definitely happy about that). I imagined the givers being happy about their gifts, as some of them indicated with notes. It was about imagining this river of money flowing through our hands and out the doors into all the work we do as God’s hands on this earth. I imagined it flowing from us straight into God.

If that isn’t spiritual, I don’t know what is. Money may have received a bum rap by some religious professionals due to Jesus’ fit of anger toward money changers in the temple. But Jesus wasn’t objecting to monetary gifts or money itself. He was objecting to extortion of poor people who were forced to convert coins at bad exchange rates.  Jesus spoke of money frequently.

Perhaps the evangelical counsel of poverty, popularized by St. Francis and other monastics, has cast a shadow on some religious professionals and made them wary of money. Francis himself chose to imitate the poverty of Jesus, but both Francis and Jesus were good at asking for what they needed: transportation, food, shelter. And the apostle Paul frequently mentioned money and the need to support church work in his letters, and he transported money to churches on his journeys. Saints Theresa of Avila and Catherine of Siena, two Doctors of the Church who lived intentionally in poverty themselves, were champions at raising money for charitable causes while living simply themselves.

I wish that pastors and priests who feel uncomfortable talking about money would spend a morning with their church’s money counters and feel the generosity emanating from those gifts. If they could sense the joy that giving engenders in people, they might be more inspired to speak of pledging and money gifts as a practice of generosity and liberation. We have a pastoral obligation to invite people to give generously in the same way we invite them to pray, to worship, and to do works of justice and peacemaking in the world.