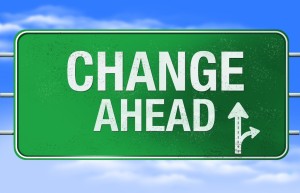 There are two types of people in this world: those who embrace change, and those who do not. Guess which group is happier.

Change is inevitable in life. From the moment we are conceived in our mother’s womb, we are changing, cell by cell, millisecond by millisecond. We cannot find even one short instant in life in which we, and everything around us, is not changing. With every breath, we change. When we breath in, we increase the oxygen in our blood. When we breathe out, we increase the carbon dioxide in the air.

So to live in resistance to change means to resist the very nature of life itself. To live IS to change. In fact, it is impossible to resist most change in life, so to resist is simply to cause oneself pain while straining to stop something that will happen anyway. Why resist?

In both of the readings for today, the leader in the story is going through a major transformation in life, and the followers are resistant or afraid.

Look at the story from second Kings, for example. Elijah tells Elisha three times that the Lord is going to take Elijah away. And Elisha says in response three times, “I will never leave you.” And he does not leave. In the end, Elijah leaves Elisha! Elisha resists the upcoming change, even though it is not in his power to stop Elijah from being taken up into heaven.

And yet, he seems to know what is going to happen anyway, and he is unhappy about it. The company of prophets following him ask him, “Do you know that today the Lord is going to take him away from you?” And he responds, “Yes, I know. Shut up!” He is in denial. He does not want to talk about it. Even as Elijah disappears in a swirl up to heaven, Elisha is still yelling after him.

Something very similar happens during the life of Jesus. Today’s Gospel story of the transfiguration of Jesus on the mountain happens just after Jesus has told the disciples that he will be rejected by the elders and killed. Peter rebukes Jesus for saying this. This is when Jesus tells him, “Get behind me, Satan. You are not thinking as God does, but as humans do.”

And then in the story we heard today, Peter and James and John see Jesus transfigured by a bright light, and the disciples are terrified. Something is happening to their leader. He says he is leaving soon. What are they going to do?

There is another similarity between these two stories. In both accounts, the leader who is about to leave passes on something about leadership to the follower. Elijah passes on a double dose of his spirit to Elisha so that Elisha can carry on his prophetic work. When Jesus and his disciples come down from the mountain, Jesus tells them not to mention the transfiguration until after he has died and risen from the dead. In other words, he is commissioning them as leaders who will carry on his work.

One of the ways we grow spiritually is to take responsibility and assume leadership roles, especially when a leader is departing. One of the most frequent actions of Jesus was to form leaders. He often taught his disciples how to lead: to teach, to heal, to serve rather than to seek status. He told them that they would do greater things than he did, and then he sent them off on missions.

In fact, his main ministry was to form leaders. And he must have been very good at training leaders. When we read the Book of Acts, we find the disciples becoming leaders and teachers in the new church. They recognize that Jesus has moved on, and it is time for them to step up and become leaders.

I think Jesus spent so much time grooming leaders because to lead is to grow spiritually. People assuming a new position of leadership will encounter many challenges. They may experience fear and doubt about their ability to lead, or uncertainty about which new direction to take. They will certainly experience resistance from people who don’t want change. Leaders will have to change themselves: they will need to grow in grace, magnanimity, wisdom, and patience. To lead other people, we must cherish those people’s lives and love them. We must live with our attention turned outward to others rather than inward toward ourselves.

All of these actions are tremendous steps in spiritual growth. Times of great change in one’s life are also occasions for spiritual growth. Whether we experience positive changes such as a new job or a new home, or difficult changes such as a death in the family, we are transformed and stretched by the experience. We learn again and again to turn to God for guidance and sustenance during these changes.

Leaders experience spiritual growth in both ways. Not only are they stretched by their responsibilities, but they also are instigators of change, if they are good leaders. Or at the very least, they notice changes as they arrive and prepare their people to adapt and grow.

We see Jesus doing all of these things: caring responsibly for his disciples, causing changes himself, and preparing his disciples for changes that would happen to them.

Another perfect example of this is Absalom Jones, whose feast day was February 13. He was the first African American priest in the Episcopal Church. And he became a priest when he and Richard Allen and other African Americans were told by white church members that they could not sit with other worshippers in the same pews. He responded by walking out of the church with other African Americans, and he later established the first black church, the African Episcopal Church in 1794. He is a hero of our church, a man who saw a void in leadership and filled it. He refused to be subjegated to racism, and he instigated the necessary changes.

Let me explain. As attendance at most churches in the Western world declines, everyone is saying that we must redefine what the church is. And to do this, we need new leaders who approach church leadership differently.

Some people argue that we need priests who are entrepreneurs. When I was in seminary a few years ago, we had a weekly symposium with “successful” priests, and we called them entrepreneurial priests. Success was defined at persisting and thriving in difficult circumstances, or growing a church congregation, or launching a very successful mission project that exceeded its goal. We were taught that we needed to be different from the previous generation of priests.

At the same time, the Universal Church is saying that church members must take a more active role in being leaders of the church. This is partly to respond to the fact that fewer churches can afford to pay ordained leaders. They say we should not look for ordained priests and ministers to drive the agenda of the Church. Instead, all church members should acknowledge the priesthood of all people—as well as the change in church finances—and step more actively into leadership roles in the church.

This means that changes in the Church are forcing church members to adapt and grow as leaders.

There are also obvious parallels between our readings today and our current moment of change at All Saints Church. Just as Elijah was lifted up into the heavens, our rector Ed Bacon has flown off to the South to visit family and to see if he and his wife might want to retire there.

We also see examples of church members at All Saints stepping more fully into their leadership roles. Today is an exciting day for me because we are starting our first class for New Members in Spanish. I have hoped for this moment since I arrived in 2013. And we are able to start this class for two reasons: first, because fifteen of you said you wanted to have a New Members class in Spanish; and second, because two leaders came forward to help us launch this effort.

Two weeks ago, Antonio and Carlos told me and Francisco that they wanted to start this class and had lots of interested students. With Norma Guerra and my colleague Anita Nunez, we all moved into action quickly. We divided the work and stayed in close contact with one another. We adapted quickly to changes in language, the class materials, and the class schedule. And we were filled with excitement about this new growth in our Latino ministry.

When we welcome New Members into the church at our Easter Vigil in April, we will welcome people in both English and Spanish for the first time. It is a momentous occasion for us. And it happened because, in this moment of leadership transition for All Saints, many of you accepted the prophetic mantle of membership and leadership. You said, “I wish to be counted among the disciples.”

The New Member class is in itself a tremendous opportunity for spiritual growth for both students and the group leaders. Students will hear other people share the stories of their spiritual journeys. And each student will share his or her own spiritual journey. They will notice ways in which they have changed and grown spirituality throughout their lives. And they may start to see signs that God has been leading them to this moment of change in their lives.

They will be able to see God’s presence more closely because that is what happens during these transformative moments: we see the bright light of God more clearly. In change, we recognize God’s call to us to grow and to lead in new and unexpected ways.

This can be a joyful adventure if we embrace change. We should embrace it the way we cherish anything that we love deeply. Because change is the essence of life. Onward!