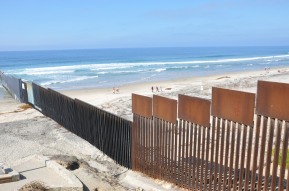 I recently returned from an international preaching conference titled “Preaching on the Borders” in San Antonio, Texas. The conference is a combination of worship sessions with preaching from stellar preachers, followed by lectures by those stellar preachers and others. As a preacher from the border of city of San Diego, I think a lot about border issues. To my amazement, the vast majority of the preachers attending the conference titled “Preaching at the Borders” were white. And to my greater amazement, there were no Latino preachers, despite our being in the border state of Texas. I had thought we would be engaging, at least to some extent, the issue of the “wall,” both literal and figurative, that some wish to build between the United States and migrants from the south.

Of course, “borders” can be interpreted figuratively. And most preachers did interpret it figuratively, speaking of marginalization based on gender, sexual identity, religion, Christian convictions, etc. The conference did feature a number of renowned black preachers such as Yvette Flunder and Vashti Murphy McKenzie, who briefly addressed racism as just one of the many issues that marginalize people. And there were two workshops by Dr. Samuel Cruz and Dr. Claudio Carvalhaes of Union Theological Seminary, both of whom addressed the Latino experience, and both of whom were scheduled at the dinner hour when the crowds are much smaller.

The one white preacher and lecturer who did address racism head on was Will Willimon, a renowned preacher, professor and bishop. An older white man, Willimon grew up in the segregated South and has been engaging racism in his sermons for decades. The main point of his lecture was to encourage white preachers to preach about racism.

I told her about my experiences preaching about racism as a white preacher. The few times I have done it, black and Asian members have thanked me for doing it, and white church members walk up to me and spontaneously confess something racist they have done. Every time.

Let me clarify. I’m talking about my experience of preaching in English to a predominantly white congregation. When I have preached in Spanish to a predominantly Latino congregation, they have listened with sad recognition when I preach about racism; it’s expected that racism is a deeply significant aspect of existence and a frequent topic of discussion. No one thanked me or congratulated me for preaching about the obvious.

But in the mire of white privilege, we white preachers talk about whether we should preach about racism, as if it might not be important enough to talk about. As if it were not deeply affecting the people of God around us. As if we might not know enough about racism, so we should leave it to the occasional guest preacher we invite on Martin Luther King Sunday. As if we might, accidentally, say something racist or insensitive or ignorant and out ourselves as racist or insensitive or ignorant.

We will. We are all of those things. It is an act of racism not to preach about racism because we don’t think the topic is important to our congregation or we don’t think we are involved in it. And while we will say something insensitive or ignorant and trigger someone, the only way to become more sensitive and less offensive is to speak what we know and learn from others’ responses. The question isn’t whether white preachers should preach about racism. The only questions we should be asking are, “How often?” and “Who else can I bring into this discussion?”