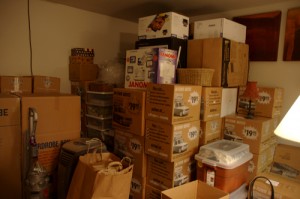 Little did I know, when I packed up my stuff in New York City, that I wouldn’t see it again for three weeks. (The promised date of delivery was June 14, but it arrived on June 25.)

All we had brought were some clothes, our computers and our iPhones, expecting the moving truck to arrive in Pasadena when we got there on 6/14. Nope!

But to my amazement, members from my new church said, “Oh, no! What do you need?” And in a few days, we had two air beds and bedding, enough kitchen stuff to make simple meals, and two very comfortable armchairs. (I have to give the armchairs back because they belong in a lawyer’s office, and that’s too bad, because those chairs are incredibly comfortable.)

In other words, I had the extremely Franciscan experience of wandering office to office, asking, “Do you have a coffee maker? A toaster? A can opener?” People said to me, “It’s like camping!” But it wasn’t really because when one camps, one packs very intentionally to handle all situations one will experience, and we had not done that. Thus our need to beg like mendicants.

The odd thing for me was the realization of what I missed most. It wasn’t the TV or the rest of my wardrobe.

It was my books. I kept saying to people who asked how the move was going, “I don’t have my BOOKS.” It turns out that I can navigate work and the rest of life with three pairs of pants, a skirt, and a pair of shorts, a clerical blouse, some running clothes and four pairs of shoes. And despite the privation, I lived pretty well without a TV. In fact, it was blessing given the Giants’ abysmal performance the past few weeks. I could cook okay with other people’s cookware.

But I could not seem to abide living without my books. I had some new Kindle purchases on my iPad, so I was not without things to read. What I lacked was the physical embrace of my books around me in my home, their watchful eyes upon me every moment. I had not realized what guardian angels they are to me.

The movers finally came (while I was out of town), and it turns out that they failed to deliver six boxes. We don’t know what was in those boxes, and I keep thinking, “I hope it wasn’t the books!”

As difficult as this experience has been, it has been a fascinating spiritual exercise in discovering what things I value the most and am unwilling to let go of. I took my daughter with me, so it goes without saying that I value her the most! I also took my priest ordination Bible with me–the only book whose weight I was willing to lug around for two weeks.

It was also a good spiritual exercise of asking for and accepting help, something Francis excelled at due to his vow of extreme poverty. Actually, I did not ask for help. Instead, multiple people asked how the move was going, and when they heard the news, they started offering furnishings. But it did remind me, for the umpteenth time, that it is okay to ask for help. In fact, it is important to ask for help.

It reminds us that we are always dependent upon the grace of others, to a certain extent, and that absolute self-reliance is a spiritual lie.

I am extremely grateful to the members and staff of All Saints Pasadena who continue to help us through this transition. They made God’s love manifest to us. Someone asked me what else they could do for me, and I said, “Offer this same radical welcome to every newcomer who comes through the door.” Because that would be amazing.